How on earth do you brush a toddler's teeth?

This seems to be a question I see a lot on various groups and forums so I thought I'd share our experience which through lots of trial and error have found almost continuous success.

When Baby D's first few teeth came through she was only 6 or so months old so it was pretty easy. We used Brush-Baby dental wipes. You just pop the little ‘sleeve’ on your finger and wipe around the gums and over the teeth. Easy peasy…until tooth number 4 came through and she bit my finger very hard! I then needed to find an alternative.

She was teething like crazy and I tried with a tiny toothbrush but all she’d do is chew on it. Cue the chewable toothbrush. Again by Brush-Baby is the Soft Chewable Toothbrush. It’s made from silicone with soft ‘bristles’ in a curved shape that echoes the shape of the gums. You just put a small smear of toothpaste on the bristles and baby can happily chew away on it and brush their teeth at the same time. They also make a teething toothpaste in apple-mint flavour which Baby D particularly liked. It contains xylitol which is great for teeth (and natural too) plus fluoride but a reduced amount. There seems to be conflicting views on how much fluoride babys can have but I know you have to minimise swallowing so it doesn’t damage their tummies. There is no way I am going to persuade a baby to spit out toothpaste, that’s just daft. So I concluded that a reduced amount might be good at this stage. 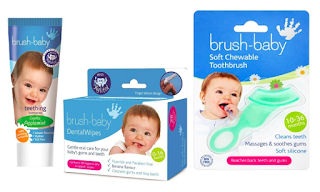 It wasn’t until Baby D was around 1 that we started using a proper toothbrush every day. She was given one by the health visitor at her year 1 check and she immediately wanted to give it a go. We started off great guns with her happily opening her mouth and me brushing. This lasted only a week or two before she became bored of it. She then started the extremely annoying habit of clamping down on the toothbrush or refusing to open her mouth. Obviously brushing teeth is an extremely important thing to do every day so after a few days of trying and failing at getting her teeth brushed properly I saw no alternative other than forcing it. After 30 seconds of screaming and crying I realised I’d done the wrong thing and swore I’d never force anything upon her ever again. Forcing her to have her teeth brushed twice a day is not only unsustainable and highly stressful for her and me but also sends the wrong message about consent. Pus I was concerned that making this unpleasant for her may make her develop a fear or aversion to tooth related things and I didn’t want that. We had to come up with a gentle solution.

We use a variety of approaches depending on Baby D's mood, tiredness level and time constraints. We don't restrict brushing to the bathroom. We have the smallest bathroom in the UK and there simply isn't enough space for two people even when one of them is a toddler. So, it usually happens in the bedroom sat on the bed.
We always use two toothbrushes. She inevitably wants to hold one herself and brush her own teeth / brush your teeth / brush teddy's teeth or generally wave one about.
We always ask her first ("we need to brush your teeth now, is that okay?") to gauge which approach to use:
Other techniques that we've tried and failed with include buying a special electric toothbrush which terrified her, watching YouTube clips and making up toothbrushing songs and bribery.

So, as Baby D approaches 2 years old we successfully brush her teeth twice a day. We accept that it may take 15 minutes using various methods (albeit a bit/very annoying sometimes) but at least it is done without tears from her or us.

Do you have any tried and tested techniques? 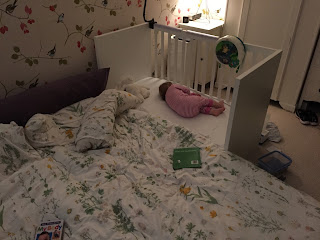